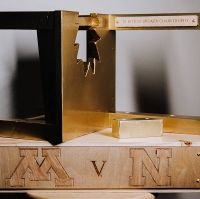 Year FIVE of the Broken Chair Trophy fundraiser is upon us!We are Joe Bernard and Michael Andrews, fans of the University of Minnesota and University of Nebraska football teams. After four successful years of fundraising where fans from all over the country have donated $43,000 for charity, the Broken Chair Trophy fundraiser returns for year five!

Together, with a lot of help from each fanbase, we are hoping to leverage the popularity of the Broken Chair Trophy into some support for worthy causes connected to each University.

We hope that you participate in our fifth year of fundraising in anticipation of the annual battle between the University of Nebraska and University of Minnesota football teams. Our goal this year is to raise over $20,000 combined for our partner organizations.

*All donations made to this page will support Casey O'Brien's Team One Four Infusion Center Transformation fund.