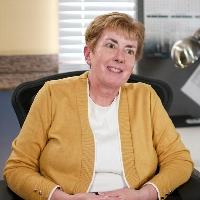 A personal campaign sponsored by LHB and Industry Friends

Make a gift today in honor of Roberta's memory and the impact she had on the industry and countless others who were lucky enough to know her.

To honor the legacy of pioneering civil engineer Roberta Dwyer, LHB established an endowment of $25,000 in 2020 to support a civil engineering scholarship at UMD in her name. It is the hope and intent that we can work with friends and industry partners to reach a total endowment of $50,000 to secure a robust scholarship that can support women engineering students in perpetuity.

Roberta was a civil engineer who graduated from the University of Minnesota in 1982. She worked for 39 years at the Minnesota Department of Transportation, starting her career in MnDOT’s graduate engineer program as one of their first female engineers. She held a variety of engineering and management positions, including maintenance operations engineer, principal, project manager, and major projects project manager.

Roberta oversaw some of the most complex projects in MnDOT's District 1 Duluth office. She finished her career having worked on some of the largest transportation initiatives in the Northland, including the final extension of Interstate 35 through Duluth (1992), the I-35 Mega Project (2010-12), Piedmont Avenue reconstruction (2004), and the U.S. Highway 53 bridge relocation in Virginia (2015-17). Before her passing, Roberta was integral in the Blatnik Bridge reconstruction (2028) and the $343 million Twin Ports Interchange reconstruction project (2021).

Roberta loved solving the challenge of a complicated project and was known for her willingness to take on anything difficult. Her passion, commitment to excellence, and vast knowledge of her profession and community garnered her respect from all who worked with her and created many long-lasting relationships. Roberta mentored young engineers and enjoyed sharing her experience and the work of MnDOT with the community, often as a MnDOT spokesperson and through the University of Minnesota Duluth’s University for Seniors. Throughout her life, Roberta strove to empower women, from her involvement in Job’s Daughters, a leadership organization for girls, to the American Association of University Women (AAUW), that advances equity for women and girls.

Roberta’s legacy can be seen in the transportation systems she oversaw that were built throughout Northeastern Minnesota, and in the engineers whose careers were influenced from her dedication and mentorship. Never wanting to leave the work she loved, cancer forced Roberta to retire from MnDOT after several years of fighting the disease. Only a week after her retirement, she succumbed to cancer on July 14, 2020. However, Roberta’s legacy and dedication to engineering excellence lives on in the projects she oversaw, and in the careers of the engineering students helped by this annual scholarship.