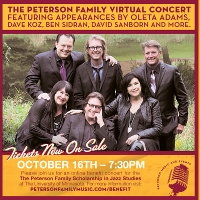 Minnesota’s First Family of Music and MN Hall of Fame members, The Peterson Family, has been performing locally, nationally, and internationally for many years. After the passing of matriarch Jeanne Arland Peterson in 2013, her five children, Linda, Billy, Patty, Ricky, Paul Peterson and grandson Jason Peterson DeLaire collaborated with the University of Minnesota to establish the Peterson Family Scholarship in Jazz Studies.

Beneficiaries of the scholarship are enrolled as a full or part-time U of M student, majoring in Music and focusing specific studies in the art of jazz. Candidates who apply for this honor must complete an audition, be accepted to the College of Liberal Arts, and maintain strong academic achievements. In addition to meeting these criteria, scholarship applicants must also demonstrate artistic promise as a professional jazz musician and determine financial need.

ABOUT THE VIRTUAL BENEFIT CONCERT

The extended Peterson Family will perform a benefit concert to raise awareness and funds for their scholarship on October 16, 2020. There will be performances by some of their famous musical friends, an auction, fund a need, and appearances by previous scholarship recipients.

ABOUT THE PETERSON FAMILY

The Peterson Family is often referred to as "Minnesota’s First Family of Music." Everyone in the Peterson Family is a musician/singer, including cousins Russy and Tommy, and the next generation, Jason and Jeanne Taylor. The storybegins with the late great Jeanne Arland and Willie Peterson.

“Jeanne Arland Peterson was the grande dame of Minnesota jazz. Not only did she raise five children who are professional musicians, but she amassed Minnesota Music Hall of Fame-worthy credits: 22 years in WCCO Radio's house band, led by her late husband, Willie, three years as the Minnesota Twins organist, performances with jazz stars George Benson, Sonny Stitt and Roy Eldridge, and entertainers Bob Hope, Perry Como and Red Skelton, to name a few.”

The Peterson Family has collectively performed with everyone from Dizzy Gillespe,